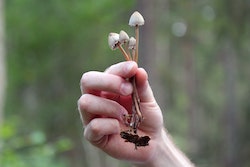 What is Psilocybin and How Can It Be Used in treatment of Opioid Use Disorder?

• Psilocybin is a major component of “magic mushrooms”
• In studies, high doses have been found to bring on mystical experiences
• Psilocybin's biological effects suggest that it could help in treatment of addiction

Psilocybin (pronounced “sill-oh-SY-bin”) is one of the major psychoactive compounds found in so-called “magic mushrooms”, along with psilocin (“SILL-oh-sin” or “SY-lo-sin”).

While there are more than 180 varieties of mushrooms that contain psilocybin and psilocin, psilocybin is the main component of most varieties.

Since ancient times, cultures around the world have used different types of psychoactive mushrooms for spiritual, cultural, and healing purposes. Psychoactive mushrooms have been found all over the globe – from the Americas to Japan, Europe to Southeast Asia, Alaska and Siberia to southern Chile and the South Pacific.

While their complete geographical range isn't known, the greatest variety of psychoactive mushrooms has been found in Mexico. Historically, the Mesoamerican region was a hotspot for ritual use of mushrooms and several ethnic groups in present-day Mexico continue to make use of them to this day.

Studies show that when mushrooms are consumed, the body absorbs the psilocybin and converts it to psilocin. So psilocin is actually the “active ingredient” directly responsible for the effects of magic mushrooms. Psilocybin is a more stable compound, though – it can be stored for longer without as many changes to the molecule.

The potency of psilocybin in mushrooms (and thus the strength of effects) can vary greatly, and is determined by several factors. These includes the species and variety of mushrooms, the growing environment conditions, and the age of the mushrooms.

The Effects of Psilocybin Mushrooms

When consumed, psilocybin mushrooms produce psychoactive effects that many have described as an "internal journey” with different phases and sensations. Many users report “mystical experiences”, similar to other “classic psychedelics” such as LSD.

Depending on the dose taken, the duration of effects is usually around 4 to 6 hours long (though not at the same level of intensity the whole time).

Generally, the experiences that mushrooms provoke can contain both positive and enjoyable aspects, as well as less pleasant elements that can be mentally or emotionally challenging. Some major factors in determining the nature of the experience are Set and Setting – that is, the person’s mindset and the environment that they are in when they consume psilocybin.

In addition to the ability of psilocybin to induce mystical experiences, other potentially therapeutic effects have been found in clinical trials.

Studies have shown that psilocybin is helpful in the treatment of anxiety and an increase in quality of life for people with advanced cancer diagnoses. Psilocybin has also been used in research for the treatment of cluster headaches as well as obsessive-compulsive disorder.

There are also current studies running with promising results on the use of psilocybin in tobacco and alcohol addiction, and the therapeutic potential of psilocybin for treatment-resistant depressive disorders.

Psilocybin for Substance Use Disorders

Classic psychedelics (including psilocybin) have been linked to the alleviation of various substance use disorders in previous research, including lowered odds of opioid use disorder (OUD) in a nationally representative sample.

A new study published in April 2022 in the prestigious scientific journal Nature extended this work by analyzing recent data to examine whether use of classic psychedelics (psilocybin, peyote, mescaline, LSD) was associated with lowered odds of OUD. The researchers used information from the National Survey on Drug Use and Health to look at “lifetime use”, meaning whether a person had used the substance at all in their lifetime, or never.

Now research teams are taking this promising association to the next level by directly examining the use of psilocybin in the treatment of opioid use disorder. Ongoing studies at the University of Wisconsin and Johns Hopkins University are working with patients to document the effects and develop potential psilocybin treatment protocols for OUD.